With bags packed and passport in hand, I headed to the airport bright an early for my 9am flight on Thursday February 7th. I could not have left at a better time, as later that morning Toronto experienced a huge snow storm where many flights were delayed or cancelled. My flight itinerary included a connecting flight from Toronto with Air Canada, to Barbados and flying to Trinidad with Caribbean airlines.  Prior to checking in my bags, the attendant placed a sticker that stated to POS (Port of Spain). When I asked about the sticker, the attendant advised that my bags would be transferred to POS directly. At first I was a bit confused, because though I knew my final destination was POS, I thought it was odd that my bags would go straight there while I would be on connecting flights. Despite this, my dad and I asked again to confirm and were told they would be transferred straight there. With that I said my goodbyes and happily went on my way through security.

Once I arrived in Barbados, the information I was told in Toronto turned out not to be 100% accurate. Thinking that my bags were being transferred, I headed towards customs and provided my form. At the customs desk, the two attendants asked me where my checked back was and I responded by saying what I was told in Toronto. The two attendants then proceeded to tell me that was not the case and that I had to transfer it. At this point, I had two sets of conflicting information: one I was told in Toronto and another that I was told in Barbados. The customs attendants then advised me to speak with my airline to confirm. I proceeded to ask where the Caribbean Airline desk was, and headed outside to their departure counter. Once at the counter, the Caribbean Airlines staff confirmed what was said at the customs gate. My bag was still on the conveyor waiting for me there to be picked up and brought over to their desk. He went on to further say this miscommunication has happened previously with other passengers that were told by airlines that their bags would be sent directly. I ended up having to rush back and explain my story to security to let me back in to get my bag. Once I finally got my bag and wheeled it to the check-in counter, I was able to breathe a sigh of a relief (as there was a bit of a time crunch with making the connection). Recalling back to that moment, it was kind of funny some of the stares I was getting trekking through the airport with jeans, winter knee length boos and a leather jacket, while everyone was in  shirts and shorts. I decided to take a breather and switch my footwear to something more appropriate attire (sandals!)  The flight from Barbados to Trinidad went smooth. The excitement of carnival was in the air, and several passengers were singing big tunes like Bunji’s Differentology- “We Ready, We Ready for the Road” as the plane touched down in Piarco airport.

Once I got off the plane, I knew this was the start to an amazing week ahead! Walking along the hallway, I must add how impressed I was with the airport. You can definitely get the feel of the strong cultural presence, from noticing the various pictures and artifacts placed throughout the building.  Piarco Airport was also really convenient with having certain services were right at your fingertips. Two phone companies, Bmobile and Digicel had booths set up and were offering special promotions to customers during the carnival season.  While I was in Toronto, I had gotten my old blackberry unlocked with the intention to use the phone once I arrived in Trinidad.  At the Digicel counter, I was able to buy a sim card, minutes and text for about $30US. This plan was really great, as it allowed me to have a Trinidad number yet also be able to call local and international numbers back home. One thing that came to mind was how affordable this rate was, especially compared to the plans back home in Canada.

As I headed through the arrival door, I was happy to be greeted with a sign that had my name on it. I had arranged a driver through The Carnival Connection, which had partnered with TriniCabby. The gentleman who was holding the sign was very courteous and friendly and advised we could wait for the driver by the bar, as he was on his way. When we went outside, you could hear the sounds of soca pumping through the air. I instantly felt all the tiredness from travelling, dissipate from my body and had renewed sense of energy. The car ride to the hotel was extremely pleasant, as the driver, greeter and I discussed our favorite soca artistes, carnival events and sites to see. I was highly impressed by the service and professionalism of The Carnival Connection and TriniCabby. (Side note: The Carnival Connection is also extremely helpful in securing tickets for fetes and accommodations. Had I not been able to secure my tickets through family and friends, I would have definitely used The Carnival Connection.)

HOTEL
Once I arrived at the Hyatt hotel, I was instantly greeted by warm faces at the door and reception (and a complimentary glass of champagne lol). The hotel was beautiful and was buzzing with many people. The hotel also gave a greeting bag that  had a complimentary t-shirt, wrist band for the pool, information about the free shuttle and points of interest in Trinidad. (The shuttle service definitely came in handy, as I used it on Carnival Monday and Tuesday into town to find my band.)
The rooms at the Hyatt are really nice. Something which is an interesting feature is the shower and bathroom door are glass and see through, with the exception of frosting that runs through the middle. (Though visually appealing, this may be one drawback in terms of privacy). Overall the room was lovely.

The atmosphere in the Hyatt was great. I kept saying to myself, wow everyone is so friendly here! It was also really cool to find out that a few celebrities were staying or visiting the Hyatt. One morning when I went down to the breakfast buffet, for example, my friend had whispered to me “Hey isn’t that Tatyana Ali sitting there?” I was like, no it can’t be! Turns out it really was! Another interesting run in I had was when myself and a few friends came back from Cesear’s Army and were waiting in the hallway. While I am standing covered in red paint, who walks past me and heads towards the restaurant? Fay-Ann Lyons and Bunji Garlin! Wow, lol. That was definitely a great/funny moment. I also heard from a few friends they saw Vivica A. Fox in the elevator. This was definitely something I thought was cool to see at the Hyatt and in Trinidad in general: seeing celebrities without all the security and just wanting to have a good time.

Here are a few pictures and video of the Hyatt and scenery. 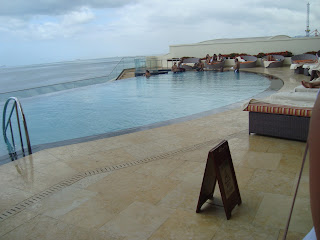 More to Come on Fetes and Carnival Monday and Tuesday
Posted by The Collabo at 12:38 PM