I'm looking forward to the long weekend! Are you? Here are some events that might be of interest. I will update it, if I become aware of more throughout the weekend. 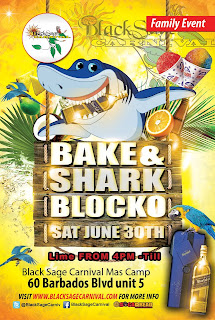 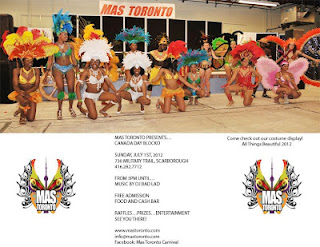 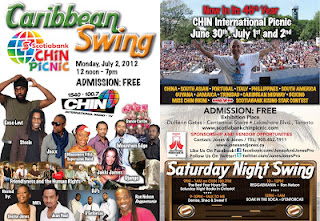 Posted by The Collabo at 8:10 PM No comments:

Here are a few events taking place that might be of interest this weekend... : ) 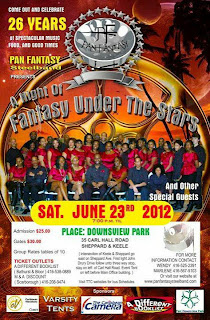 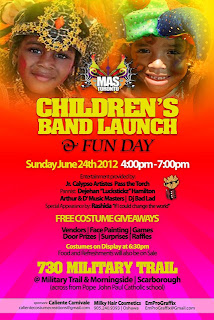 Posted by The Collabo at 7:53 PM No comments:

The third Talk Bout Dis, Talk Bout Dat post, arose from an interesting conversations I had with one of my girl friends on the topic of costume alterations. As Toronto Carnival is approaching, ideas are being discussed as to how to accessorize or do it up with makeup and footwear to match the (For those wondering Makeup Mondays will be back soon!). This year truthfully, I am lot more mellow and easy going with the process and preparation (in that I haven't really started. lol. Last year this time I already had my stockings, pouch and boots prep started and was working on the designs for my friends) I definitely have a few things in mind though... more on this later ; )

In talking about carnival, we also reflected on the high anticipation and eagerness that comes during the week of costume pick up. That conversation led to us joking about some of the false promises (or perhaps our high hopes) we had made about alterations or special request to our costumes in past years. Past request included asking for an alteration to the cage bra and using the same material from the front of the belt piece for the back of the belt instead of a boa. These requests were approved and signed off by section leaders, but on pick up day we were both surprised to see the alterations were not done. In the end both situations were resolved, as one of us did end up getting the section leader to make the alteration and I just ended up making an adjustment to my costume myself.

Now a thing of the past ( & water under the bridge) we laugh about the idea of asking for alterations and figure it would be easier to just choose another section that is equally as appealing. And considering this from the section leader's or designer's perspective, it's probably really is not fair to ask them to make minor changes or alterations here and there (potentially leading to being swarmed with individual requests), especially considering time constraints and potentially limited resources.

Fast forward to this year and learning from past experience,  neither of us have that concern or worry. Just recently though one of our mutual friends was mentioning how excited she was about the alterations that will be made to her costume. (Mmmm Hmmm). I definitely wish her all the best and hope that the alteration really is all that she has in mind come pick up day. Another one of our friends plans to do an alteration herself, by adding something to the back to give more coverage. (normally I don't think this would be an issue and have seen people add their own personal additions in a tasteful way). But from the initial conversation I heard the proposed  addition/alteration she plans to add, will somewhat throw off  the costume (imo). Again though, I wish her all the best with that and hope that I'm wrong (lol).

Thinking back to the conversation, my friend made a great point and used a term that I really liked when she raised her thoughts on the topic of alterations. She stated that it should be important to maintain the costume integrity: specifically regarding how the designer intended it to look. She used the example that if you by a Louis Vuitton, you wouldn't randomly sew a zipper on it and state oh I prefer it to go here. (because you potentially ruined the design of the bag).

I am definitely one for individuality and adding or doing something a little extra, but is there a fine line?

What are your thoughts? : )
This year are you planning on doing any alterations to your costume?
If yes, will they be done by you or the section leader/mas volunteers?
Have you ever had a good or bad experience with alterations?
Designers I would love to hear from you also!... How do you feel about people making personal changes to the designs? (yey or ney?) lol

Toronto-Lime.com Re-Opens Its Doors with a New and Improved Website

Providing the Latest on Caribbean Entertainment and The Chance to Win a Four-Day Pass to Caribana!

TORONTO, June 20, 2012 - The wait is finally over - Toronto-Lime.com is pleased to announce that it's prominent Caribbean website is up and running once again! After being offline for the last three months, the website giant is back - with even more information on Caribbean events, music and news than ever.

Clubcrawlers.com, the industry leader in Toronto club listings, news and events, recently assumed ownership of the highly sought-after brand, after operating under its founder, Jef Lo, for the past 14 years. Touted as the number one Caribbean website for those looking to be 'in the know', regular visitors should rest assured that Toronto-Lime.com is remaining true to it's roots.

Still providing fans with the Caribbean news they know and love, Toronto-Lime.com now boasts a new and improved layout, as well as the ability to create playlists from thousands of song options - and listen to them while browsing the site!

Visitors also have the option to peruse hundreds of amazing events, including a comprehensive Caribana guide. There are plenty of bonuses on the site as well, such as a photo gallery, a list of Artists and DJ's and a new Caribbean blog.

Toronto Lime fans are encouraged to take advantage of the chance to win a four-day pass to Caribana Toronto by 'liking' the Facebook page.

"We are beyond thrilled to be the new face of Toronto-Lime.com," said Hellenic Vincent De Paul, Owner of ClubCrawlers Inc. "We feel that the website is a natural extension of our brand - and we're eager to provide Toronto Lime fans with the latest in Caribbean event listings and music!"

Clubcrawlers Inc. is an online nightlife portal, specializing in Toronto club listings, clubbing news, events and music/charts. The company is located in Toronto, Ontario and provides visitors with the latest information on Toronto nightclubs and lounges. More information about the company is available at www.clubcrawlers.com.
Posted by The Collabo at 7:12 AM No comments: 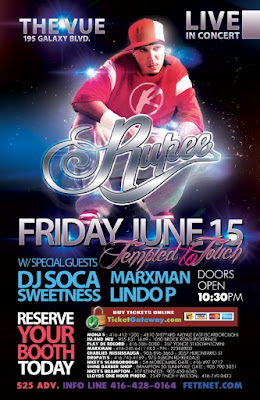 Posted by The Collabo at 9:01 PM No comments:

AfroChic is set to host our 3rd Annual Afrochic Cultural Arts Exhibit and we're going all out! On Saturday June 9th, arrive dressed in your most chic outfit and join us at The Great Hall (1087 Queen St. W.) for an evening to celebrate style and entertainment. Witness our city's shining talent in musical performance, dance, visual art, vendors and the much anticipated fashion runway. This is an all ages event. Visit our website, afrochic.ca, for a full list of performers.
Doors open at 6PM and showtime runs from 7PM-10PM. Get your advanced tickets here for $20, as it will be $25 at the door. For partnership, sponsorship, media and other inquires please email info@afrochic.ca.
Posted by The Collabo at 8:11 AM No comments: