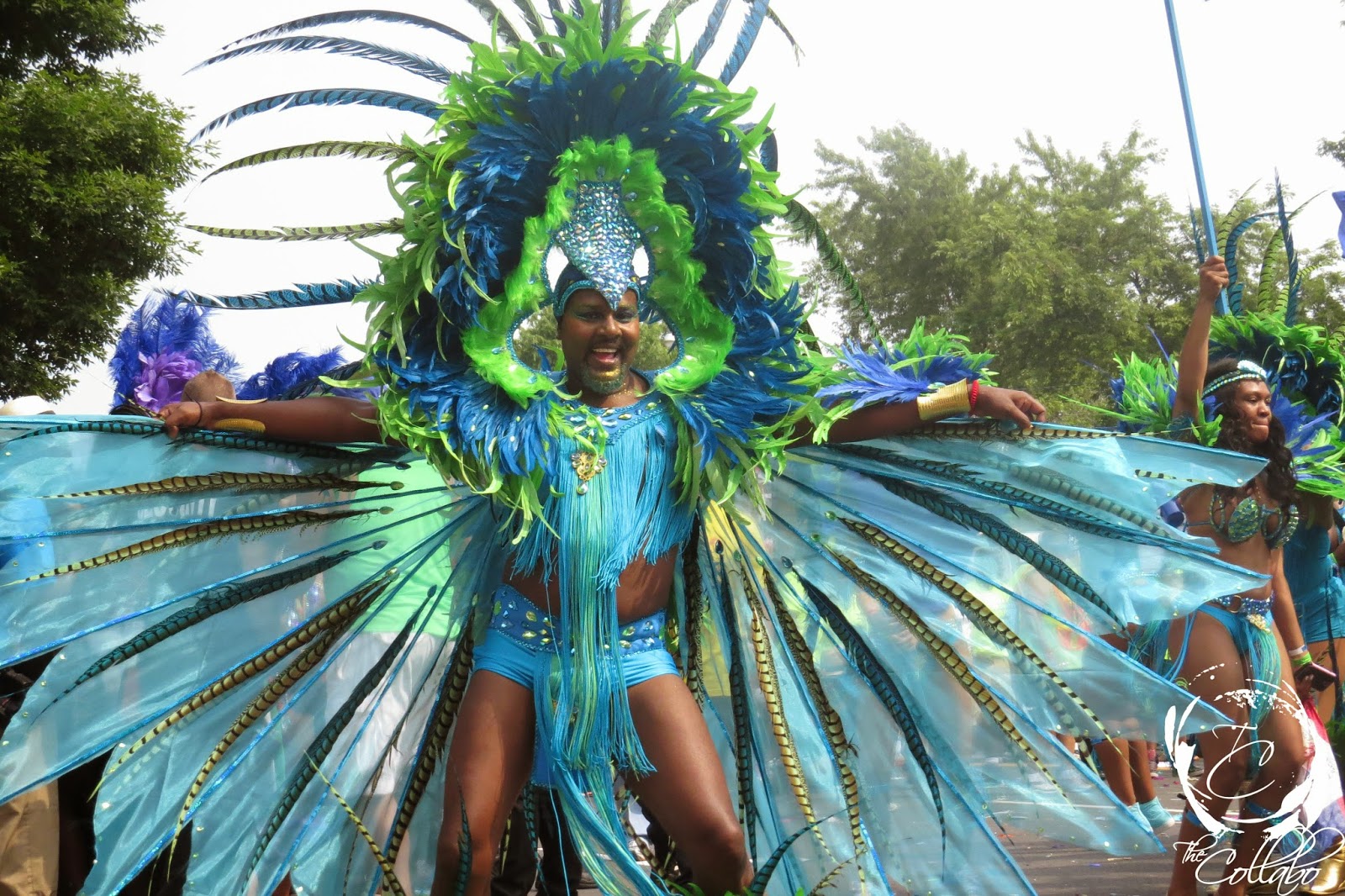 Although best known for his involvement within the automotive industry, the aforementioned quote from Henry Ford is one that I believe has applicability within Toronto Carnival. The quote highlights the opportunity for success when engagement and collaboration is leveraged. Subsequent to Toronto Carnival 2014 I have noted several initiatives, such as radio interviews, Facebook groups, blogs and petitions that have provided a platform for Toronto masqueraders, patrons and stakeholders to engage in dialogue regarding the state of the carnival. The success of Save Toronto Carnival to engage the public through social media has been remarkable, and has enabled community members to voice their opinions online as well as directly to elected officials. I am also pleased to see the initiative the Toronto Masqueraders Association took to conduct a masquerader satisfaction survey and compile qualitative feedback and look forward to reading their upcoming post-carnival report.  Collectively, in moving towards a collective goal of improving Toronto Carnival, I believe a participatory approach, whereby masqueraders and the community are engaged and their voices and experiences are considered, will be paramount.

Although not a new concept, stakeholder engagement is a topic that may lead to much debate. Engaging in discussions on Toronto Carnival with friends, an underlying sentiment expressed by many were views of a heightened need for transparency. Perceptions of an “old boys club” where conversations were held and decisions were made behind a veil of secrecy, were comments that made me consider whether these viewpoints were shared beyond my circle of friends and held broadly by the Toronto public. This conversation with friends was one that I later reflected on when I tuned in to a radio interview that was held on Soca Therapy. Facilitated by Dr. Jay, a panel of speakers, including representatives from the FMC, TMBA and TMA provided a forum for stakeholders to discuss their sentiments of the challenges and successes that were visible within Toronto Carnival 2014. In listening to the panel, one point that surprised me was the view mentioned by Denise Herrera-Jackson, where she mentioned prior to the formation of the Toronto Masquerader Association; masqueraders were not previously engaged as stakeholders within the planning process. Though Denise later elaborated the current lens has broadened and reiterated the heightened the importance of the masquerader voice and engagement with the TMA, I was still somewhat surprised by the revelation that prior to 2013 masquerader perspectives and input was not proactively entwined within the planning considerations.

Beyond being involved in radio interviews, it is my hope within the trajectory moving forward, transparency, communication and collaboration is utilized to ensure stakeholders are informed and are given the opportunity to actively participate within the planning process. Although I was happy hear within the Soca Therapy interview the incorporation of masquerader perspectives, I would suggest not only is it important for the masquerader voice to be heard and valued as stakeholders, but it is equally important for the voices of masqueraders to be taken into account and used to inform decisions made in the future. If after each year feedback is given, however the feedback is passively taken into account the following year, buy-in and confidence that adequate solutions will be implemented will be impacted. It is for this reason I believe the success of next year’s carnival and trust among masqueraders and patrons that adequate improvements will be made, will be closely linked to engaging them as stakeholders and collaboration in implementation of solutions.

Although I believe a collaborative effort which utilizes the expertise of various groups and individuals working towards a common goal is beneficial, I acknowledge difference in perspectives and priorities may arise.    An example I can recall over the summer that highlights, is an interview I heard on the My Data Bag show on CHRY 105.5 FM.  The panel of guests included, blogger and masquerader Karabana, in addition Karli, the mother of a young masquerader. Both Karli and Karabana highlighted their concerns related to security and safety, which was corroborated by the host, William Doyle-Marshall, however midway through the interview the host and co-host pointed out a major concern to be related to facilities and change rooms. Although some of the concerns and priorities highlighted as what should be addressed differed, the commonality among all participants was rooted in the desire to improve the carnival for masqueraders and patrons.

When working towards a goal, and thinking about the activities or strategies that are needed to achieve a desired outcome, one tool which may be beneficial to use within the planning stage is the logic model. A logic model is a visual depiction of how activities relate to our outcomes. Illustrating an “if then” relationship, a logic model is intended to highlight the link between certain activity and the output or result that is anticipated. For example “if” we provide disseminate a public awareness campaign on Toronto Carnival “then” we expect for the general public to have a heightened awareness of the upcoming events.

Based on what I have been reading on the suggestions and feedback posted on social media, I created a draft logic model on some of the activities proposed within an education campaign. This sample logic model is posted with the intention to stimulate thought and generate discussion about how activities link to the desired outcomes that are hope to achieved. Is there anything additionally that should be included? removed? considered? 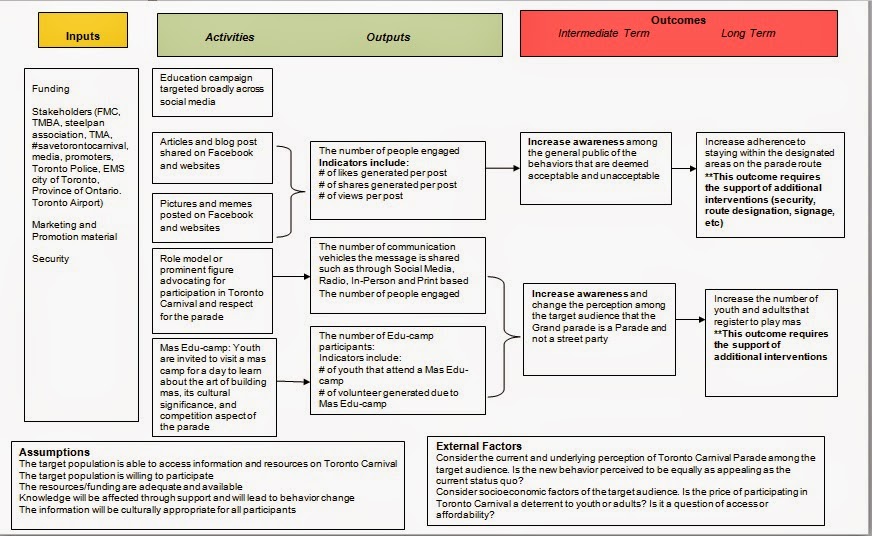 The benefit of the logic model when multiple stakeholders are involved is that it fine tunes the discussion about the link between the activities and outcomes. Although at first there may be disagreement on how things link and whether certain activities will lead to certain outcomes, the process of creating a logic model allows for stakeholders to discuss their viewpoints while taking into account the assumptions and external factors that are being made. At the end of logic model process, the goal is to have a document that collectively all the stakeholders buy into as to how the components lead to a desired outcome. Although logic models are intended to highlight the link between the activities and outcomes, it is possible upon implementation the end result is not what was anticipated (i.e. unintended consequences).  In such cases, the utility of the logic model is being also able to refer back and identify what part of the process did not produce the results as planned.

What defines a successful Carnival?

It was great to hear the various variables that define a successful carnival and value of cultural underpinnings. Nonetheless in defining success, one aspect that I felt was missing from the dialogue, in particular with respect to considering accountability, is how the various variables would be measured or quantified. It is difficult to really know the success or impact that is being achieved within Toronto Carnival, such as creating value, propelling change or enhancing experiencing without some form of evaluation. If for example success is defined as a carnival that educates and highlights cultural awareness, in response I would say this is great, however I would follow up by asking how that indicator would be evaluated or measured.

What exactly do I mean by evaluation? Program Evaluation is the systematic collection of information which is used to make judgments regarding value or effectiveness of a program or initiative and is used to inform decisions made in the future.  With Toronto Carnival 2014 being over, program evaluation could be used to assess whether the decisions and initiatives that were implemented this year, produced the desired outcomes or results that were planned. Although I am not aware of the evaluation strategies currently being used by the planners within Toronto Carnival, I would definitely encourage the use of tools such as surveys or focus groups as a tool to collect qualitative feedback from masqueraders and patrons. Using portable washroom facilities, as an example, this year the decision was made to introduce stand-alone facilities along the route as opposed to facilities placed on a band truck. Using program evaluation to assess effectiveness or success of the portable facilities from a quantitative perspective, an indicator of success would consider whether the number of portable facilities along the parade route were adequate. From a qualitative perspective obtaining the perspective of masqueraders who accessed the facilities and were able to provide feedback on the proximity, access and adequacy of facilities would be able to further highlight whether the new initiative was a success.

Over the past few months, it has become increasing apparent there are a lot of people and groups who are truly invested and committed to seeing Toronto Carnival become a phenomenal event. In response to wanting to be more involved, informed and active participants, over the past two years several new organizations and initiatives were established with the goal to improve Toronto Carnival and the masquerader and patron experience. With only two more months remaining in 2014, I look forward to seeing the great strides that can be made within Toronto Carnival 2015 through a collaborative effort.
Posted by The Collabo at 9:25 PM