With the dust settling from Toronto Carnival, many voices and questions have been raised regarding this year’s parade.  Critiques pertaining to the parade route, the issue of stormers, and procession of the bands were highly scrutinized; however in actuality have been longstanding topics of debate prior to 2014. Rather than reiterate the criticism, I believe it is more advantageous to shift the focus and priority to determining what can be done to propel improvement and solutions in the future. Within this post, the issue of storming and communication strategy to deter this behavior will be discussed.

The Uphill Battle: Information and Behavior Change
As mentioned by many sites, there is a heightened need to emphasize the cultural underpinnings and respect for the mas displayed within carnival. I wholeheartedly agree and commend organizations like the Toronto Masqueraders Association and media sites such as Karabana Blog and Trinidad Carnivals for their commitment to advocacy and raising public awareness. Drawing from my experience within healthcare, one limitation I observe with the provision of information, is that despite one’s efforts it may not necessarily drive behavior change. Consider an everyday example: while watching a television program, a commercial comes on that describes the benefit of exercise and nutrition as way to prevent diabetes.  Bearing in mind only the information that is presented within the commercial, do you think you will feel motivated to exercise or eat healthier? Possibly not if you feel this commercial does not apply or is targeted to you; and even more so unlikely if you currently enjoy or prefer the status quo of being sedentary and inactive. Along the same lines, using the issue of storming as an example, although information is provided to the general public regarding Toronto Carnival, I believe if information on respecting the mas is not also targeted to the audience that engages in this behavior, changing the status quo (i.e. jumping the fence) will continue to be an uphill battle.

Cultural Competency and Cultural Sensitivity:
Apart from the goal to raise awareness and drive attendance to the events taking place during the three week Toronto Carnival festival, I would suggest the goal should also include promoting enhanced cultural competency and cultural sensitivity within audiences.  In looking at the terms cultural competency and cultural sensitivity, the commonality is the word culture. Culture is defined as the “values, norms and traditions that affect how individuals of a particular group perceive, think, interact, behave, and make judgments about their world.”  So what does cultural have to do with being competent and sensitive? Although several definitions apply to the term cultural competency depending on the context in which it is used, one definition of the term is that it is the congruent behaviors, attitudes and policies that come together as a system, agency or among professionals and enable that system, agency or those professionals to work effectively in cross-cultural situations. Despite the above definition being quite the mouthful, where I see and draw the relevancy to the issue of stormers is to the point on congruent behaviors within a cross-cultural situation. Generally speaking, although Toronto Carnival is a celebration of Caribbean culture, it is held within a city and attended by patrons who are diverse and as such inadvertently the parade occurs within a cross-cultural situation. Turning our attention to the term cultural sensitivity, this is defined as the knowledge, awareness and acceptance of other cultures. Collectively, the reason why I think it is important to incorporate these terms within the lens that we view Toronto Carnival, is I believe the goal is to not only heighten knowledge and awareness, but to also to promote the adoption of shared attitudes, behaviors and supportive policies that preserve the essence of Toronto Carnival as a celebration of culture within not only masqueraders but among non-masqueraders and law enforcement.

Targeted Interventions and Engagement
How then can we inform, raise awareness and effect behaviors pertaining to participation in Toronto Carnival and in particular the Grand Parade? In considering the delivery of information through social media, newspapers and magazines, my personal observation is although phrases such as Jump on de Road or Feel the Vibe, highlight the festival as a celebration of culture, it does not promote the desired behavior of stormers to respect the mas or allude to the parade being in part a competition. Although I am not suggesting I have concrete answers as to how to solve the issue of stormers, I do believe the possible solution lies in the combination of interventions that include providing information, use of products such as fences and wristbands, incorporation of policies and enforcement and participatory engagement from multiple stakeholders. 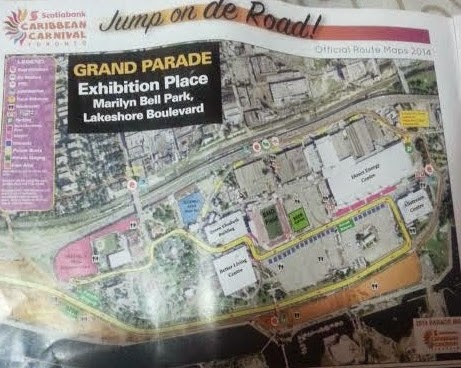 Apart from effective management, organization and inclusion of initiatives that ensure the parade runs smoothly, I do believe there is utility in designing targeted messages and interventions to deter storming among the audience that participates in this behavior.  But who is the target audience or more simply who storms? If we define a stormer as non-masquerader that enters the parade route, one intervention could be to incorporate signage posted on fences which advises one to stay behind the barrier. As a realist however, I know posting a sign to stay behind the fence, would be unlikely to stop a non-masquerader who is equipped with wire cutters, especially when the current status quo (ie. ignoring the sign and passing through or jumping the fence) is deemed as acceptable in his or her eyes. Well what about the incorporation of security as a secondary intervention, for those who don’t adhere to the signs? Although I think this is great and also necessary, its limitation is that it is a reactive intervention rather than proactive intervention.  This leads me back to thinking about the question of who the target audience is and perhaps warrant the need to define stormers with more specificity. Retrospectively, I acknowledge it would be quite difficult to collect information on the number of stormers that were on the route, in addition to what were their characteristics, however I cannot ignore the fact this type of information could prove to be quite useful when trying to design and deploy messages that are targeted to this audience.

Are we really reaching Stormers?
When evaluating the effectiveness of current strategies (more on this topic later), one variable that should be considered is whether there was a change or impact within the target audience, and the reasons why or why not it occurred. When I consider information I post on The Collabo blog or Facebook page, for example, I am aware that the audience that reads my blog is likely interested in carnival and associated information on the parade and upcoming events. I assume these readers already have connectivity or interest in the information that is being shared, and as such they want to stay informed on the new information pertaining to carnival. Do we however view stormers the same way? Are stormers reading our blogs, visiting our Facebook pages or websites for information? My guess is probably not. Regardless of how well the message is constructed, if it is not delivered through channels that the target audience is engaged with or exposed to, its effectiveness may be limited. This leads me to suggest that if our intention is to provide information with the aim to promote awareness of Toronto Carnival, and in addition promote cultural sensitivity, competency and overall behavior change within stormers, the latter communication and interventions should be delivered from a targeted approach.  If for example, the perception is that a large proportion of stormers are males between the ages of 20-29, perhaps one strategy to communicate messages to participate in playing mas, and/or adhere to staying behind fences would be to have this information available and accessible within locations that the target population visits (ie barber shops) and incorporate information the audience values (ie the ratio of women to men). Using an everyday example, think about the interventions and communication strategy that has been used to deter driving and texting. Only a few years ago this behavior was commonplace, however with the introduction of visual cues on billboards on our the highways, the enforcement of fines, as well as the delivery of messages that highlight the danger and potential implications, driving and texting is becoming less of the norm.  Perhaps addressing the issue of storming is similar in that it requires a mix of communication strategies and interventions that are used to deter and prevent this behavior.

As a summary of Part One of my Toronto Carnival Reflection, this post was intended to highlight the relationship between the provision of information and behavior change, in addition to encourage the inclusion of cultural competency and cultural sensitivity as an underlying goal of communication strategies.

Stay tuned for Part Two of my Toronto Carnival Reflection, where I plan to discuss the use of social marketing, evaluation and inclusion of a participatory approach (bottom up and top down).

What are your thoughts? Feel free to share your opinions by posting a comment below or sending an email to the writer, Yinx, at the.collabo.inc@gmail.com
Posted by The Collabo at 8:52 PM