Q & A with Carnival Nationz: "Empires"

This year I thought it would be great to continue the question and answer style posts from the caribana newbie series, and extend it to a Q & A with the mas bands. I know I myself wonder what goes into thinking of a theme, color choices, etc.

Though four bands have launched, I have only been able to get the questions answered by one band thus far.

TCB: This past Saturday, Carnival Nationz launched their 2K12 presentation “Empires”. Can you tell us what inspired this year’s theme choice?

CNZ: To briefly answer the question, every year between the three band leaders we discuss ideas for the theme. We also ask the section leaders for their suggestions as well. We try to find a theme that has a grand scope and includes various things which we can portray. With Empires, there were so many things that could be taken from it as a theme.  For example, from the research we did, we discovered there were not just 6 or 8 empires, but in fact dozens.


The idea for this year’s theme kind of came from Bryce. The inspiration was drawn from last year’s success of Carnival Nationz; in that no other band has ever won all categories (Band of the Year, King of the Band, Queen of the Band, Male Individual and Female Individual). The interpretation is that by providing quality costumes, excellent customer service and an amazing experience on the road, we in time can become an empire.

TCB: At the launch a total of 12 sections were displayed. Can you share with us briefly the process of choosing which Empires to depict?


CNZ: By doing research on the topic, there were various empires to choose from. Each section leader went through the different empires and chose from there. The selection process also takes color choice into consideration.  Often, section leaders have in mind the colors that they would want to do for his or her section. For example, for my section Rio, I knew the colors I wanted to incorporate where blue and green which worked well to depict the Brazilian Empire, as these are colors also in the Brazilian flag.
TCB: Being that each section is representative of an Empire what influenced the design and color choices to make this year’s presentation different from previous years?


CNZ: Though each designer is different, I believe that everyone gets inspiration. The source may be from different things such as jewelry, watching a Victoria secret fashion show, movie, or past costumes. It depends on the level of the inspiration that one chooses to use. For example, wings were highlighted in one of our sections last year and were something we wanted to incorporate again this year. My section Rio (Brazilian Empire) incorporates wings and the color may be familiar to those who have watched the recent Disney film Rio, such as my daughter. In the mas world, the quick expression that people use when comparing designs is the word copy.   With creation or recreation it is a matter of how your creativity is used.


With respect to color choices, the colors of costumes are usually chosen first. We generally work a year in advance, in that at the end of each carnival season, section leaders are usually already thinking of what colors they want to incorporate for the next season. It is not something that you can do at the spur of the moment.


TCB: This year loyalty registration for past Carnival Nationz masqueraders is no longer in place; what were the reasons contributing to the change? * Please Note: This question was asked when it was assumed registration was beginning online on Monday*


CNZ: Based on our capacity know we can accommodate all our loyalty masqueraders. We also do our best to make well designed costumes, so that masqueraders can have several options to choose from.


TCB: We noticed a slight increase in the prices for costumes, can you comment briefly on the factors which contribute to the increase?
CNZ: Carnival is based on women and they take pride in what they look like. It is not simply to put together sequences, braids, beads, but to produce good quality costumes.


When making costumes by hand, volunteers are useful and helpful but when you start getting to a certain number or capacity, solely using volunteers may not be the best option. It is important to understand there are costs associated with manufacturing and shipping. Ensuring costumes are manufactured at the right spot so that quality is maintained, in addition to produced and shipped on time involves costs.


In looking at this from a business perspective, the markup in Toronto Carnival is much lower than other North American carnivals and significantly lower when compared to business or suppliers that may charge up to 300% more for a product. The increase in price is a little more justified, when it ties into the points mentioned earlier about producing a costume on time, maintaining quality and the experience while on the road. This year we have even moved the band launch earlier to allow for more time. Overall, we truly take pride in our costumes and to deliver the ultimate carnival experience.


TCB: In addition to the parade, what other events through the summer can people look forward to from Carnival Nationz?


CNZ: We have two other Carnival Nationz events, the blocko on July 15th and the boat cruise on July 22nd.
TCB: Overall, for masqueraders who will be deciding what band to play with, what do you want them to know about the Carnival Nationz experience?


CNZ: We are the best Toronto Carnival Experience! 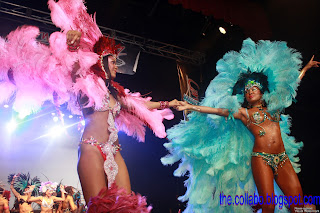